Thank you to my fave blogger/friend/writer Shan for tagging me to do this, do check out her blog and show love where you can!

I’m a massive lover of Prison Break and of course the brothers Michael Scofield (Wentworth Miller) and Lincoln Burrows (Dominic Purcell).I could re-watch specific episodes/scenes and quote it word for word at this point and that’s no exaggeration.

(Also can I just throw in that I’ve met Wentworth Miller (and Dominic Purcell “Lincoln Burrows”), and he is an absolute gentleman. Pure at heart.)

Let’s start with your favourite parallel. – Two scenes from separate seasons that have similarities.

In SEASON ONE amongst the chaos of the prison riot Michael finds his way back and reunites with Lincoln. In the same way, during the LAST SEASON, it’s hard not to notice the same embrace and brotherly love as Lincoln finally gets a moment with Michael.

Who is your favourite character?

Obviously, it’s Michael Scofield. Look at the man! The character of Michael is the essence of Prison Break, and Miller delivers the principles of the show flawlessly. Scofield’s a genius of sorts, yet mysterious, cunning and charismatic all in one go. He’s the man with the plan. The man with every contingency planned out (and tatted on his body). You love all his little strategic patterns, like the origami bird which is now his trademark. Nothing but love for him.

Who is your least fave character?

It took a moment to pick one that was clearly justifiable. I’d have to say, Wyatt Mathewson, without hesitation. You know, the man who killed Mahones son. I hated every second he was on-screen.

Name a character you should hate but love?

Theodore ‘TBAG’ Bagwell. It almost feels wrong to love him. You know you shouldn’t – but you do. The actor’s (Robert Kneppers) role is absolutely legendary/iconic. With every strong protagonist, there needs to be a rival to keep the show alive. T-bag does exactly that. He’s a favourite for his witty replies/remarks, absurdity and somehow his allure. A character built on the physiognomies of a psychopathic murderer, it takes real talent to get an audience to love you.

What is your favourite episode?.

I have two. The pilot (obvs) but I’ll share S01 Riots Drills and the Devil (P1 and P2). It’s during the prison riot, and things start to get heated. Tbag discovers the hole behind Michael and Sucre’s toilet, Abruzzi’s involved etc. It puts you on edge and you get a real taste of the anticipation and apprehension that’s to come. 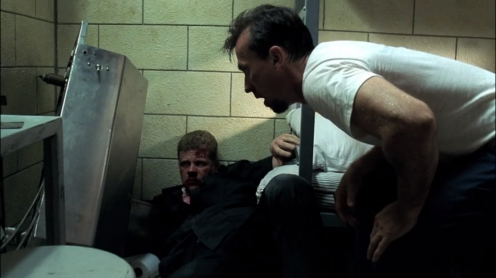 What is your least favourite episode?

I wasn’t a huge fan of season 03 as a whole. It seemed to drag and there were a few characters (like Lechero) that I wasn’t fond of either. But there were, however, strategic moments which would later develop significance like Sara’s fake death and Whistlers bird book which T-bag goes on to steal.

Name a scene that made you cry the most?

Season 04: Ep22 / The Final Break. Michael’s death. A death which breaks my heart every time, knowing he deserved better for all his love and sacrifice. I still cry despite now knowing he’s alive.

What is your favourite friendship on the show and why?

‘PAPI’ and Michael, OF COURSE! Fernando Sucre. The sugar to the show. The brother from another mother. He’s just lovable and his loyalty and devotion to Mike is so gratifying to see. He’s just so sweet. I mean, he knocked over a liquor store for the girl he loved and just wanted to impress!

If you could choose only one episode to watch for the rest of your life, what would it be?

The S01 pilot. We’re acquainted with the ploy behind Michael’s stunt in the bank, and the entire gimmick of the show – the escape plan. Michael had contributed to the design of the prison with every step of the escape, elements of the blueprint and every contingency mapped out, in the form of a tattoo. It’s just incredible. Normally shows take a few eps to get into. Well, not Prison Break. AND, ofc the S05 ending. It still gives me chills.

How it all started

The ending he deserved

Name a character you hated at first but loved in the end?

Alex Mahone. I loathed the man at the start when he first made his appearance in S02. He was just too sketchy and occupied in wanting to end Michael, then killing Tweener and Haywire. His character development was so commendable, as through into Sona we see a different side. One which becomes favourable in season 04. I fully think his character redeemed himself and I loved him working with Michael and not against. A true dream team!

Choose a favourite quote from each season. What are they?

“We’re not breaking out of a Jamba Juice, gentlemen.” – Michael Scofield

“Picture makes me look like a sociopath!” – Theodore Bagwell

“I gotta commend you on that boom box trick. Very sophisticated. You steal that one from Home Alone?” – Gretchen
“You fell for it, B-tch!” – Lincoln Burrows

“We are captives of our own identities, living in prisons of our own creations.” – Theodore Bagwell.

“Poseidon was monitoring my communications with everyone who could possibly be a resource or an ally, but not with people I despised.” – Michael Scofield
“Give it to me straight, how you really feel about me?” – Theodore Bagwell

LOVED writing this and sharing my answers with you guys!

Have you seen Prison Break? IF not, I cannot recommend it enough. You will be hooked, watching it until 4am.